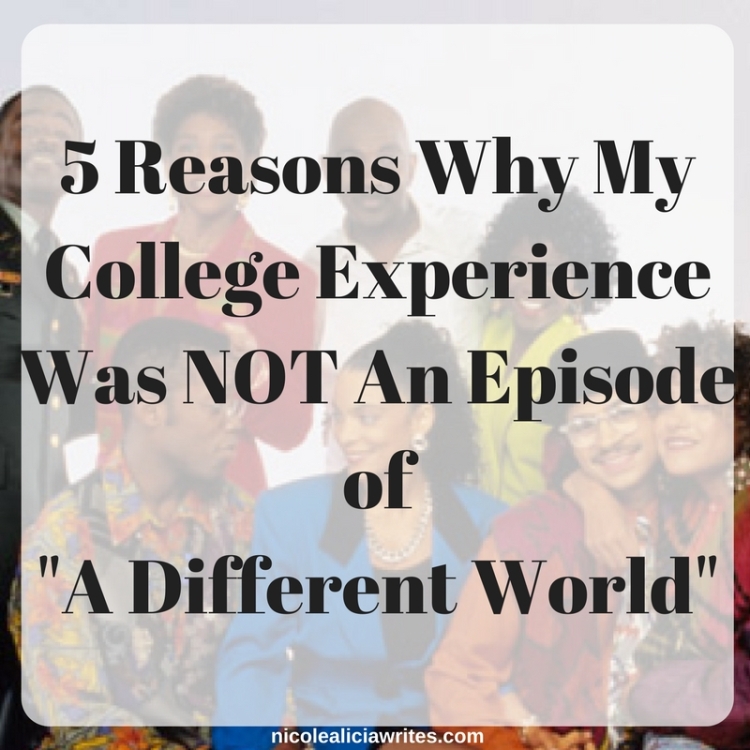 As a matter of fact, I don’t know why it would have been because I didn’t attend an HBCU.

I was actually accepted to Lincoln University in Jefferson City, Missouri although my parents quickly crushed any hopes of me traveling that far to attend school. I also thought well what if I could go even further. See I had set my sights on Grambling State University in Louisiana along time ago. I was a band kid back then, with hopes of going to a school with a dope band. My mother quickly explained to me that was too far for her only baby to be going.

Growing up  my favorite sitcoms (and still are my favorite) were Cosby Show, Fresh Prince, Family Matters, Martin, Living Single and A Different World. We watched them together as a family religiously!

I particularly liked, “A Different World” because being the only child and being the oldest grand child I didn’t have anyone else around me who had this type of college experience. My aunt went to Lincoln University in the 80’s and had some stories for me. My mother stayed home and attended UMKC and my father went to NWMSU, but stayed only a year. So I didn’t have much to go off of other than this show.

Plus, Hillman College not only gave the black college experience but it gave the experience of black kids attending college for this first time.

The show “A Different World” was so important to the culture then and now. It covered so many different issues and topics that still important to this day.

1. I didn’t go to an HBCU – The University I went to was in the city of St. Joseph, Missouri (whoot, whoot Go Griffons!) which has roughly 45 minutes north of my home in Kansas City, Missouri. Honestly, I was accepted to a few different schools, UCM, Lincoln University and MWSU. MWSU was the most cost effective and my parents felt comfortable enough that if something happened, they could reach me. I ended becoming friends with a few people who went to HBCU’s and because of this, I visited Lincoln Universtiy, Spelman College and Morehouse. So, I did get to briefly experience what that life was like. I don’t feel like I missed out at all.

2. Although I was light skin with “pretty hair”,  I was no Whitley Gilbert– Matter of fact far from it! It was through blessings of Jesus Christ himself, I graduated at all. I wasn’t born with a silver spoon in my mouth and like many other students I went to school with, how you were going to pay tuition was a struggle from semester to semester. I didn’t even have a car on campus until my junior year. I had worked all summer to fix this hooptie, because the transmission was shot when I bought it.

3. There was no Colonel Taylor or Mr. Gaines– I think the one black guy on staff when I started MWSU was a guy by the name of Mr. Karl Bell. He was about the closest thing we had to anybody like that, with wise banter and to keep us in line. He was head of the Black student group on campus and I think he left our school my sophomore year.

4. The guys I dated in college were NOTHING like Dwayne Wayne-Most of them cared academically, but some didn’t. Now that I look back, I think some of them were honestly just there for the girls and the partying. Dwayne Wayne was a borderline genius and I think all those kind of guys were taken or some how we never crossed paths.

5. My roommates where nothing like Kimmy or Julissa– Whew! I could tell you some roommate horror stories! But, I’ll save that for another post. Let’s just say, 1 out of 3 of my roommates was decent. Only one of them was older than me. She was very wise like the character Julissa and did try to steer my clear of trouble. None of them however, was going to school to be a doctor like Kimberly Jones.

My junior year, I went to visit a friend who attended Spelman College in Atlanta, GA. We toured Spelman and the neighboring school Morehouse. It was awesome, to say the least. It was a bit different, but mostly the same from what we experienced on campus in St. Joseph, Missouri. Just with a ton more style and swag! I actually did get to see that famous dorm they cut to and often showed on “A Different World” which was cool as well.

My character Melody Thomas in my upcoming novel, “Drama University” experiences college for herself, but it’s nothing like a sitcom!