So it’s been many years since I dated. I’m permanently “cuffed”, happily “cuffed” and have been since May 2009.

Tuesday my post was on, “When Is It Time To Let It Go”.

So, I thought I’d do something a little opposite of Tuesday’s post.

I think it was about, August or so when I saw all these different messages on my timeline about “Cuffing Season”. Now mind you, I have been out the dating game for a minute, but I do remember what it was like. So, I decided to do this exploratory post on this topic.

So when I initially heard about this “cuffing season”, I wondered is this really a thing?

Who knew that loneliness was a seasonal thing?

It seems that it starts when the weather is about to change seasons, I get that much. I don’t blame you single ladies, who doesn’t want to find a “bae” warm and cozy to snuggle up with? Today in Kansas City, it’s 62 degrees, which is still relatively warm but I know cooler temperatures are coming and I love snuggling up with my bae!

So trust me, I understand.

I’m not sure this was an actual thing 10 years ago. But judging from the Tweets and Meme’s I’ve read, this sounds like a recipe for disaster.

I read a tweet the other day that stated that you should keep your intentions clear from the beginning. Well, isn’t this the truth! But, I think that should be the motto in all dating situations.

I already knew when I was dating that I was a different kind of girl. I think I was always looking for long-term relationship. I didn’t really like dating and had a few horror stories I could tell.

But it also just sounds like an excuse to stop messing around and try to find someone nice to stay with for awhile. But ladies, shouldn’t you already be doing this? Perhaps I’m confused on this one.

Boy, dating is complicated these days!

Perhaps that is what is wrong with today’s society. We’re always trying to find the next best thing. This is a little schedule I found from 2014… 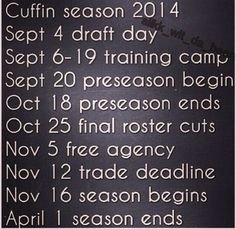 Happy “Cuffing Seasons” to all the single ladies out there who are participating. Good Luck!

Maybe I don’t get it, maybe I do…comment below!!!