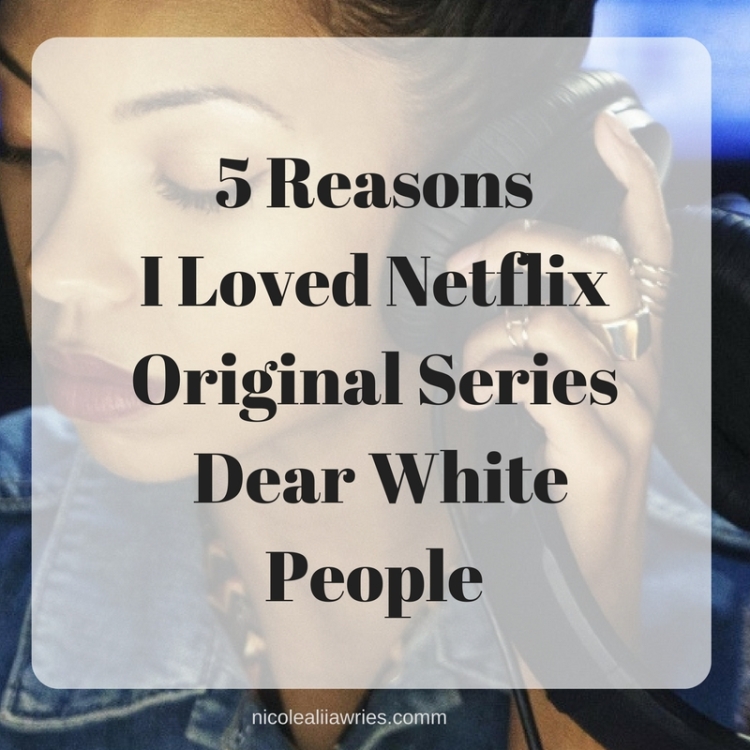 I watched the original movie, Dear White People like 10 times when it first came out. It’s still one of my favorites. A movie centering around a student ran radio show that address the dislikes of other white students by a mixed race activist on campus, what an interesting view.

But there are more than a few reasons that I liked the movie and this new series on Netflix but here’s 5 Reasons I Loved Netflix Original Series Dear White People:

Logan Larice Browning is gorgeous! I was sad when the actress from the movie Tessa Thomson wasn’t playing the part of Sam on the series, but I think Ms. Browning did a great job as well! Plus I think she’s drop dead gorgeous!

The individual character focus. During the DWP series, each characters story was told further in depth. Much like the movie, but told in 10 chapters instead for the series. I love to hear the back story of characters even when I’m read a novel it helps to understand where the characters are coming from. We knew that Coco was a complete witch with a capital “B” but why was she this way? I love that they explained it from her point of view.

The out front relatable, healthy dialogue about race relations in this country. Many times things are just hit on or touched on but in no way did they take that approach. The hit on the whole police officers killing young black men and even the incident where Reggie gets a gun pulled on him by campus police. Talk about relevant!

Things that really happen on predominately white College campuses to black students. Just from experience, I did attend a predominately white University. Some of the things that went on while I was there was just that the white kids weren’t purposely ignorant, they just simply didn’t know because they had not been around kids of any other race. Much different from some of the characters on the movie, I didn’t experience any but a certain roommate who clearly had a problem with me because I was black.

Oh, the drama of College life. The protests, the love triangles, experimentation, secret rendezvous’s, where do I fit in and campus scandal. I loved it all! I liked how the writers addressed the struggles of many black student’s but also portrayed the positives like the nightly meeting to watch “Defamation” a spoof of the ABC series “Scandal”. Also, the inside cook-out where they had my favorite  Shasta Grape Soda!

What a excellent series! I hope they make a Season 2.

What were you’re thoughts?